skip to main | skip to sidebar

Most of the year was going to doctors and being sick, this was me, then wham my dear husband got sick and we did not understand why, he was bleeding profusely, so we went to the ER, they admitted him, and did a colonoscopy, said they did not see anything, give a blood clotting medicine and after 4 day hospital stay they sent him home.  He still was bleeding some but not as bad, after afew days home the blood rush came again, back to ER same thing, admitted him, and this time did a Endoscopy,  In it they found a 5mm bleeding Ulcer, at the top of his stomach, why on earth they didn't do an endoscopy the first time is beyond me, it may of made a real difference in the outcome. They give him 2 pints of blood and medicines, after 5 days of freezing in his room he got to come home, wonderful can be together again, oh I love that man I was so excited.
When he come home I fixed all his favorite foods but he could not eat much, he still was freezing, I wrapped him in a heating blanket and still he could not get warm, so after 4 days of this I called his doctor and told him and he seen him right away, he was so weak I had to get a wheelchair to get him into the office. The doctor took his temp normal,low but normal, he took his oxygen level, it did not even register, so they brought in a big oxygen machine and it registered 84, well he called for the rescue to take him back to the hospital, they came and took him into ER room, soon as he was settled they said I could go in with him. (Taking a moment because this is so painful) I stayed as long as I could, they admitted him again, and he said he wanted me to get home before dark, I didn't  want to go, but he insisted, and I didn't want him upset set, so I kissed him goodbye and told him I loved him and would see him tomorrow.  They did tests and said he had Pneumonia in both lungs and infection, how when he was only home 4 days, they did another Covid testtoo, and wala it was positive, he had to get it in the hospital, not sure about any of that, but of course I couldn't see him, he just got worse and worse, his oxygen levels would not come up, so after 5 days of fighting and him non responsive for 2 days they said he would not recover, so now they let me see him, I had to have them take the bipap off him, and I prayed so hard he would live without out , but he took a couple deep breaths and just quit breathing, December 23, 2020 how did all this happen in just one month??? Beyond my wildest dreams I never thought I would have to go on without him.
He was my life, my love my strength for over 60 years, so God took him home, and I do not doubt for a second that he is happy with Jesus.  Now Jesus is my beloved, my love my strength, I could not go on without my lord and his grace. It will be 8 months the 23 of August,, and the lord has taken care of me, I want for nothing physical, or Spiritual, my only want is that I go to be with Jesus and my dear husband.
I am sorry this was so long, and there is much in between untold also, just not that important, here is one of the last pictures I took of him, and I,, at Thanksgiving he cut a tree down in the back, still very vital. Oh what a day makes a difference, love your husband and family you never know when Jesus will claim them. 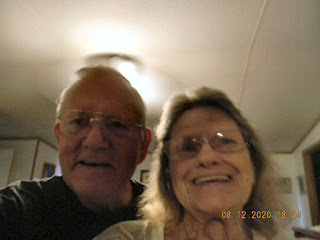 Oh dear friend:( I am SO sorry to read this and deeply saddened for your loss. I lost my Sister to COVID in February, two more siblings to other diseases in 5 months. What a horrible time it has been as I know it was for you too. I will be praying for you and your family. Sending HUGS and PRAYERS (Thank you for letting your blog friends know so we can pray)

Thank you very much for your prayers and finding me again, many have moved on and I am stuck here in the past, but that is how I feel too.
Have a very blessed day, and also praying for you and your losses.

I just found your blog. I am sorry for you loss. Empty words I know. My husband and I got Covid Late august of this year a few weeks ago, I am the unhealthy of the two of us, but my husband got really sick pneumonia . After a week of being home and no better both of us too weak to drive I called and Ambulance his oxygen levels were at 42. All the hospitals in our area were full so they had to fly him out of state and he passed away a week later. He was only 52. Healthy, strong. I think I'm still in shock cannot believe any of this. We were married for 29 years. Not long enough. My prayers are with you

Kim I am so sorry, I know a year later I am still expecting my husband to come home, I know in my head he is with Jesus, who he served and loved for over 50 years, but in my heart I still expect him.
Yes we were married 60 years, and went to school together and it was not long enough, I can't imagine what you feel being so young, like you I been the sick one, yet he was in good health until the bleeding ulcer weakened him then Pneumonia and Covid got him, at least he did not suffer long

I am sorry I have not kept up my blog, just not had much to say, maybe at a later time I will get back to it, if you want to find me on facebook I am Barbara Nicoline Harris, or Barbara Harris

A Woman Who Kneels Before God Can Stand Before Anyone

Colossians 3:23 "And whatsoever ye do, do it heartily, as to the Lord, and not unto men;

Friends that Follow my Blog, Welcome all the new friends too, You are much appreciated.

Charles Was The Love of My Life

Barbara
I am a Born again Christian Woman,Preacher's Wife, Mom to 5 grown children, Nana to 11, and great grandma to 8. I love the Lord my God with all my heart, soul and mind. I just want to be all he wants me to and to live a simple and very peaceful life serving him daily. I want to be a blessing to those around me, and let my lord shine through me. We use the KJV Bible only, we believe it is the holy word of God, written by inspired men of old, filled and being led by the Holy Spirit of God. 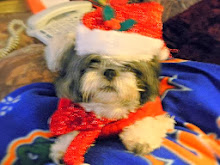 Habakkuk 3:19 "The LORD God is my strength; He will make my feet like deer's feet, And He will make me walk on my high hills. To the Chief Musician. With my stringed instruments."